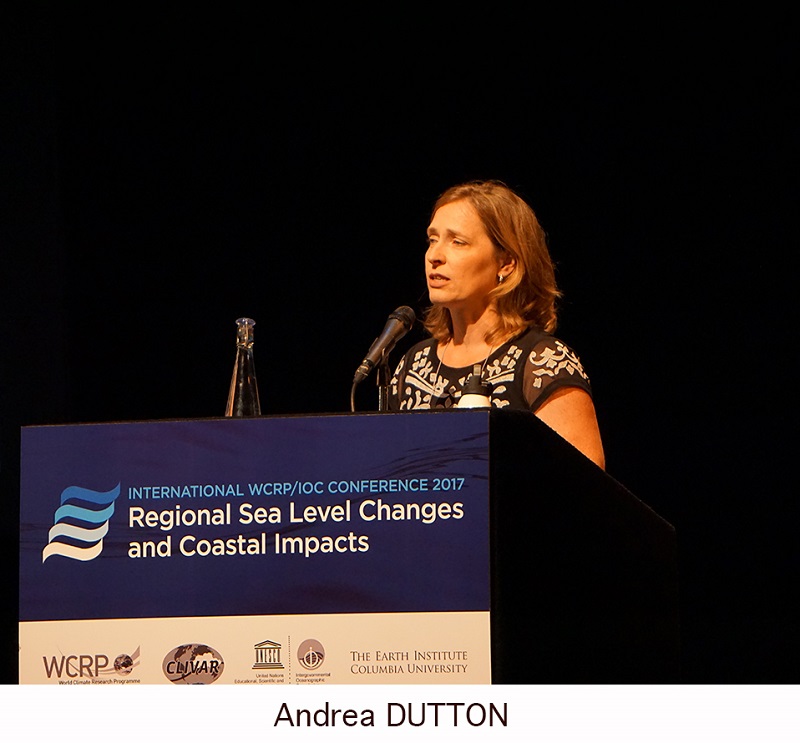 DAY 1 - CONFERENCE HIGHLIGHTS
Scientists begin conference on sea level change, starting with the past and working towards the future

The significance of rising waters in New York City was evident during Hurricane Sandy and on 10 July 2017 when hundreds of scientists gathered at Columbia University to kick-off a week long Regional Sea Level Changes and Coastal Impacts Conference. The international conference — organized by the World Climate Research Programme (WCRP), CLIVAR, and the UNESCO Intergovernmental Oceanographic Commission —has a stated vision to be:

A collective voice and expertise of the international sea level community to address existing challenges in describing and projecting regional and coastal sea level changes, and in quantifying intrinsic uncertainties.

Day one of the conference began with high-profile remarks on the societal importance of addressing sea level changes. “We have a special responsibility to help society respond to the climate issue. We need to develop smart, end-to-end, climate information systems of basic research to climate services,” said Guy Brasseur, Chair of the WCRP. Science-based information can help decision makers and stakeholders better prepare for the impacts of sea level rise through adaptation and coastal management. Brasseur suggested that the community develop a robust sea level budget.

When talking about sea level, we should be thinking about an integrated system. “Sea level is an integrated quantity of many of climate indices,” said Detlef Stammer, University of Hamburg and co-chair of the Conference Scientific Organizing Committee.

The US East Coast has some of the highest projected sea level increases. Pointing out that Manhattan is an island and lies within a few feet of sea level, Michael Purdy, Executive Vice President for Research at Columbia University, emphasized that the rate at which we are increasing our understanding and the rate of our actions are insufficient.

Globally, sea level is just as much a threat. Many low-lying nations see their sovereignty at risk. “As global temperatures inexorably rise, desertification spreads, the Arctic melts, and islands submerge, we are confronted by powerful forces who deny that any of this is actually happening, or that if it is happening it is not for the anthropogenic reasons identified by scientific consensus,” said H. E. Peter Thomson, President of the 71st Session of the General Assembly.

Sea level rise will not stop at the end of the 21st century but will continue for many centuries.

“Humankind is pushing ever harder against our planetary boundaries. These impacts are becoming more stronger every day,” stated Peter Schlosser, Associate Director of the Earth Institute. Which is why the next Intergovernmental Panel on Climate Change (IPCC) assessment (AR6) is pressing. The IPCC AR6 will give governments the scientific, technical, and socio-economic information relevant to understanding the scientific basis of risk of human-induced climate change, its potential impacts, and options for adaptation and mitigation. Specific to sea level rise, Valerie Masson-Delmotte, co-chair of the IPCC Working Group 1, shared how in the last decade over 4000 peer review papers were published with “sea level” in the title. She also presented the IPCC AR6 schedule, which includes a special report on 1.5°C of global warming (scheduled for release in Fall 2018) and an oceans and cryosphere special report (schedule for release in Fall 2019), both of which will discuss the latest science of sea level rise.

The opening session also included overview talks that set the stage for the six conference sessions. Highlights include:

Following the opening session were three sessions on paleo sea level data and modeling, millennial-scale ice sheet and sea level interactions, and contemporary contributions from ice sheets and glaciers. Below are some highlights: