The CLIVAR basin panels have been asked to provide WGOMD with input on ocean metrics to evaluate model performance in terms of ocean processes occurring in the different ocean basins. Return to main REOS Metrics page.

Metrics for the Indian Ocean

Anomalies of these two time series will define variability associated with the IOD.

b) Monthly sea level (in meters) in the same two regions as in (a). These give a measure of the time varying upper ocean mass distribution associated with IOD variability. Anomalies of these two indices can be readily validated against satellite altimetry beginning in 1992.

d) Zonal volume transport integrated 2.5N-2.5S in the upper 200 m along 80E (in Sv). This quantity should be related to zonal wind stress forcing, zonal sea level differences and SST differences across the basin. The latitudinal range should capture most of the variability associated with the bienniel Wyrtki Jets. An ADCP transport array between 2.5N and 2.5S along 80E, to deployed in August 2009 for 3 years, could be used validation for this index in the future.

e) Zonal transport per unit width (i.e. depth integrated zonal velocity) at 0°, 80°E over the upper 200 m (in Sv/m). This quantity should be reasonably well correlated with zonal transport along 80°E and is more readily verified using moored velocity measurements from 1993-94 and 2004-present.

On time scales longer than about a year, transport across XBT line IX1 is a measure of Indonesian Throughflow from the Pacific. Monthly transport (0-800m) through IX1 (geostrophic plus Ekman, in Sv) should be calculated perpendicular to the XBT line.The end points of IX1 are Indonesian shelf (Sunda Strait) (approx. 6.5S, 105E) and Australian Shelf (off Shark Bay) (approx 25.5S 113E). Time series for 1983 to 2006 exist for comparison with ocean analyses.

The Leeuwin Current (LC) flows adjacent to the West and South coasts of Australia. Latitudinal changes occur in the strength of the LC three transects should be monitored:

a) The Mozambique Channel currents and transports across the narrowest section between Africa and Madagascar around 17 S; u,v, T,S-fields from top to bottom (for volume, overturning, T & S transports). This can be connected to the LOCO mooring array across the channel that has been in place near 17S since 2003 and will stay there at least for several more years.

b) Same for the East Madagascar Current at 24°S perpendicular to Madagascar coastline out to ± 400km. Analysis by Ridderinkhof, Van Leeuwen & De Ruijter. A mooring array has been proposed to NWO, the Dutch NSF.

c) Agulhas Current transports: u,v,T & S fields top to bottom perpendicular to the S. African coast near East London (33.4°S) along the Jason-1 groundtrack out to 30°E, 37°S. Analysis by Beal and others. A mooring array has been proposed to NSF.

d) Agulhas Leakage Index: this would need u,v fields top to bottom around South Africa, roughly between 0° and 50°E, 20° and 45°S. Feasibility depends on the possibility to connect numerical drifters to the model output. Analysis by Van Sebille, Van Leeuwen & De Ruijter.

"In recent years, the Indian Ocean (IO) has been discovered to have a much larger impact on climate variability than previously thought. This paper reviews climate phenomena and processes in which the IO is, or appears to be, actively involved. We begin with an update of the IO mean circulation and monsoon system. It is followed by reviews of ocean/atmosphere phenomenon at intraseasonal, interannual, and longer time scales. Much of our review addresses the two important types of interannual variability in the IO, El Niño–Southern Oscillation (ENSO) and the recently identified Indian Ocean Dipole (IOD). IOD events are often triggered by ENSO but can also occur independently, subject to eastern tropical preconditioning. Over the past decades, IO sea surface temperatures and heat content have been increasing, and model studies suggest significant roles of decadal trends in both the Walker circulation and the Southern Annular Mode. Prediction of IO climate variability is still at the experimental stage, with varied success. Essential requirements for better predictions are improved models and enhanced observations."

The following are some indices presented in the Schott et al. (2009) review on the Indian Ocean. Classification is based on time scales of interest: averaged fields, interannual and decadal variability, and linear trends. Refer to the paper online for full size figures. 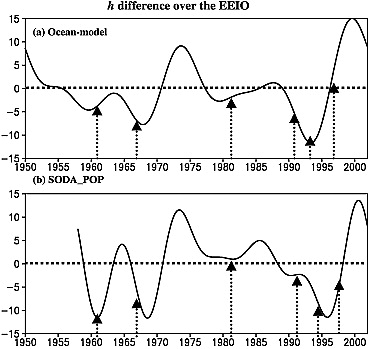 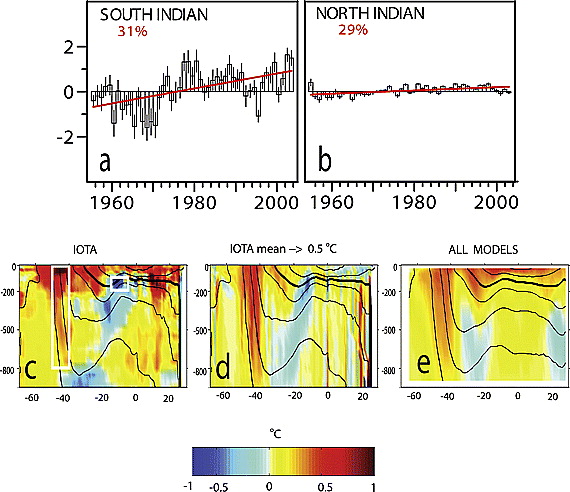