Monsoons have been defined as a shift of prevailing winds between summer (JJA) and winter (DJF) seasons. The term also increasingly refers to regions where there is a clear alternation between winter dry and summer rainy seasons. Often the two monsoons, winter and summer, are closely linked with the winter monsoon of one hemisphere feeding the summer monsoon of the other. For example, in the Asian-Australian Monsoon system, the dry air from the winter continent flows across the Equator toward the summer hemisphere picking up moisture from the warm oceans and feeding the monsoon rains over the summer continent.

For nearly 60% of the world’s population, for whom agriculture is the main source of subsistence, monsoon rainfall is their life-blood. Understanding monsoon variability and improvement in the accuracy of predictions has the potential to provide significant socio-economic returns by maximizing the benefits of monsoon rainfall and also reducing the impact of extreme events. Thus Monsoon Systems represent the dominant variation in the climate of the tropics with profound local and regional impacts.

The fundamental driver of all the monsoon systems is solar heating of the land during the spring season that helps to establish a land-sea temperature difference. This contrast with the land being warmer than the surrounding ocean triggers a low-level flow of moisture from nearby oceans, and thus moisture is rained out during convection over monsoonal regions. Due to the change of seasons the peak solar heating moves equator ward and then into the Southern Hemisphere, thereby heating the adjacent ocean more than the Asian land region. As a consequence the winds reverse, and the monsoon rainfall moves to the opposite hemisphere during the Austral summer.

Below figure (Left side) clearly shows a cyclonic circulation with ascent over Southeast Asia centered on Myanmar during summer (JJA). As the seasons progress the cyclonic circulation shifts southeastwards from Southeast Asia to just north of Australia (Below figure Right side) during winter (DJF). Thus enhanced precipitation associated with monsoons is favored over India-Malaysia-Indonesia region during summer (JJA) and over North Australia/Maritime Continent during winter (DJF). 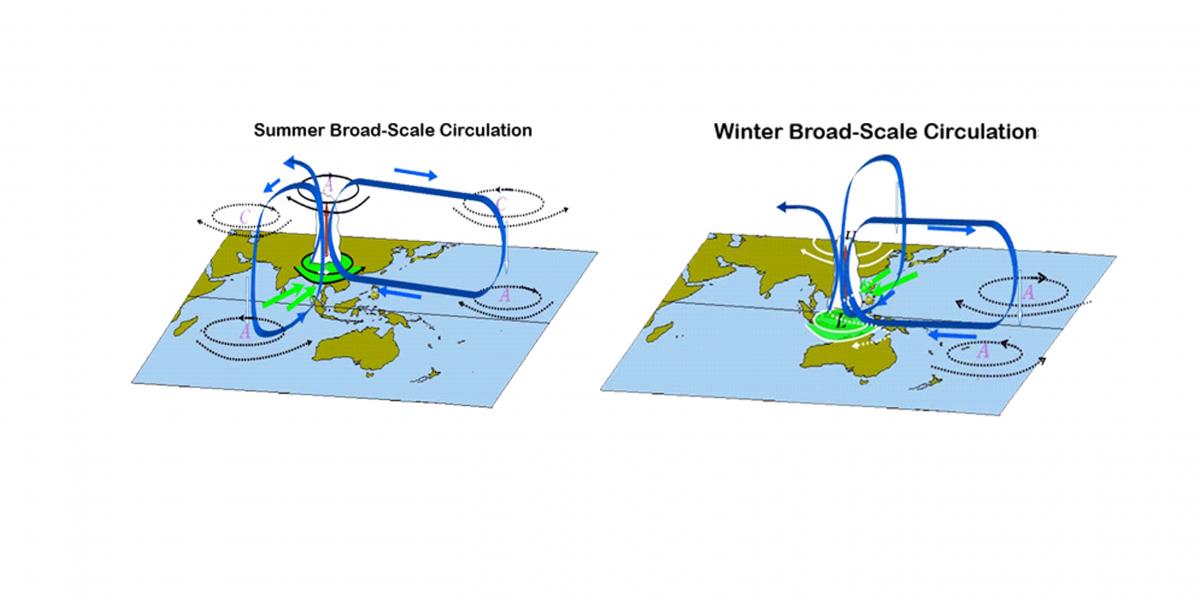 The dominant driver of Asian-Australian monsoon changes from year-to-year is the El Nino Southern Oscillation (ENSO) phenomenon i.e. El Nino warming and La Nina cooling in the equatorial Pacific. El Nino (La Nina) is normally associated with suppression (enhancement) of monsoon rainfall. Easterly flow in the lower troposphere and westerly flow in the upper troposphere (Walker Cell) during summer (Left side) and winter (Right side) associated with ENSO are depicted in Figure.

Other important influences, which may have an impact on the year-to-year variability in monsoon rains, could be the Indian Ocean Dipole – a coupled ocean and atmosphere phenomenon over the Indian Ocean. A third driver responsible for this inter-annual variability could be the North Atlantic Oscillation. Internal dynamics connected with the intra-seasonal fluctuations also contribute to the inter-annual monsoon variability.

The Working Group for Asian-Australian Monsoon is formulated with the following composition: