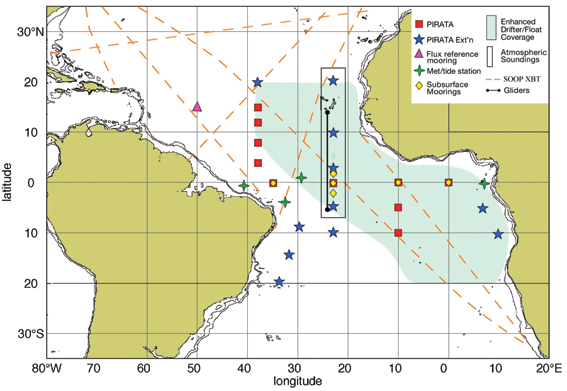 Information on Ongoing and Planned Activities:

The WG's main activities will include:

4) Monitoring of data availability and usage by the climate user community.

In particular the working group will coordinate modelling activities that lead to improved coupled predictive systems by:

The WG will contribute to the following issues:

Initial activities of the WG are:

1) Set up coordinated model intercomparison experiments to investigate the impact of horizontal resolution, mixing parameterizations and vertical coordinate representation on simulation of tropical Atlantic ocean following WGOMD protocols (e.g. using the CORE surface forcing fields). Compare these runs with available observations including the new TACE data with emphasis on the upper ocean in the eastern equatorial Atlantic and upwelling areas.

Mode of operation: The group will primarily communicate through e-mail and meet ad-hoc during workshops and conferences at which different members of the groups are present (e.g. the annual Tropical Atlantic workshop). The group will report its advances to CLIVARs Atlantic Implementation panel through its chairs and liase with the CLIVAR Working Group on Ocean Model Development, Working Group on Seasonal to Interannual Prediction and PIRATA Steering group. A website will be maintained with information on the TACE modelling and synthesis activities, including links to relevant data.