The venue for the meeting will be at the STEIGENBERGER CONTI HANSA Hotel. 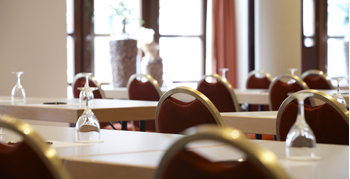 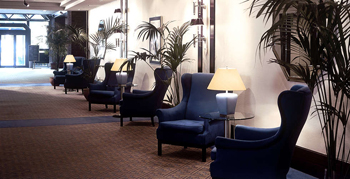 Opposite the Baltic Sea waterfront and the Kieler Förde, at the centre of the city, lies the Steigenberger Hotel Kiel Conti Hansa. From here you can enjoy the maritime flair of the city. The airport Hamburg-Fuhlsbüttel is within comfortable reach of the hotel by bus, rail or car. 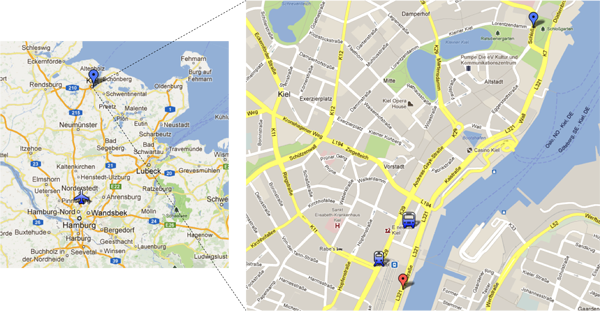 Hamburg-Fuhlsbüttel airport is 94km from Kiel. It will take ~1.5 hours to get from the airport to Kiel.

Airport Shuttle (Kielius): The Kielius-airport-bus can be used to travel between Kiel and Hamburg airport-terminal (via Neumünster). Tickets cost 33 € for a round trip, and a taxi from Kiel station to hotel is about 8 €. The total transit time is ~1 hour 25 minutes.

To make travelling more comfortable you have the possibility to combine driving taxi and Kielius. The price of this combined ticket for taxi travel to the recommended hoteld is 44 € round trip.

You can buy the ticktes directly at the bus. The bus stops right outside the terminal (but you need to look up to see the bus sign).

The Kielius bus time table can be found here.

Vineta Taxi: 0431/77080 in Kiel is reccommended by the Kielius bus company. Alternatively taxis can be found at Kiel tran staion, next to the bus station. 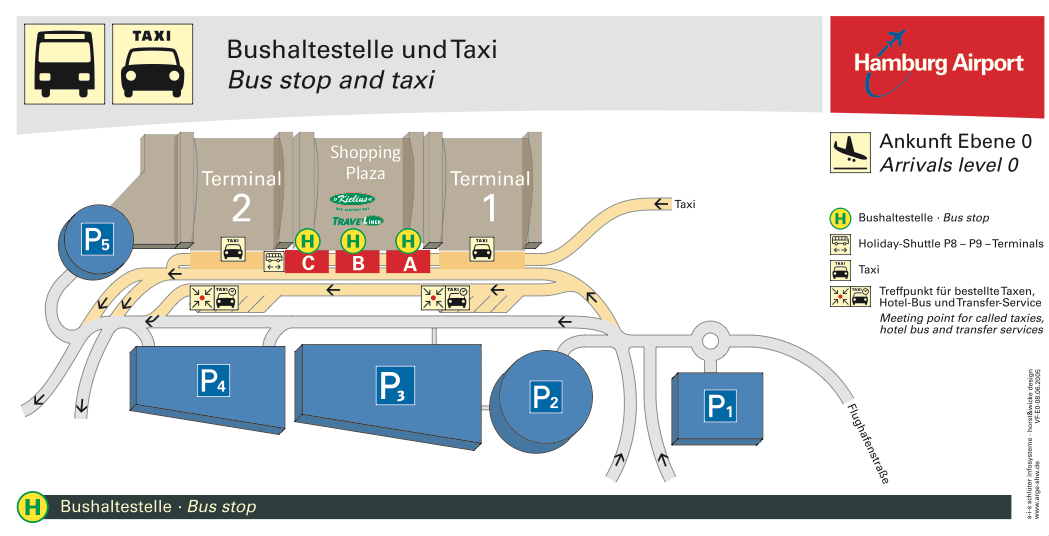 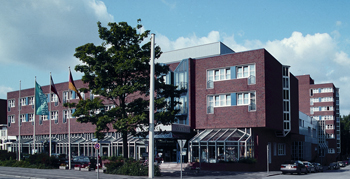 GEOMAR has kindly reserved a block of rooms at the hotel STEIGENBERGER CONTI HANSA. Standard rate at 110 € per night including breakfast, to be booked by March 22nd 2013. 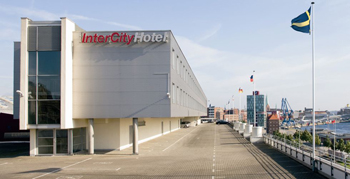 GEOMAR have reserved an additional 20 rooms at the INTERCITY Hotel. Standard rate at 72,50 € per night including breakfast. The block booking is set until April 4. This is next to the railway station and ~10 min. by taxi to the venue.

Participants are kindly asked to make their hotel reservation themselves. In order to obtain these rates please use code provided in the invitation letter sent out from ICPO on Tuesday 19th February 2013.

The CLIVAR Scientific Steering Group (SSG) meets on an annual basis, to discuss the accomplishments of the last year and future direction of the project for the forthcoming year. The meeting is the one opportunity in the CLIVAR calendar where the entire SSG and representatives from panels, working groups, national programmes, funders and other WCRP (World Climate Research Programme) core projects (CLiC, SPARC and GEWEX) all meet in once location. The 4-day meeting was hosted by GEOMAR in Kiel, Germany, the home institute of CLIVAR SSG co-chair Martin Visbeck. In total 48 people participated over the four days of the meeting, with representatives from over 30 international academic institutions/scientific organizations.

The meeting was opened with an overview of WCRP developments, in particular the six Grand Challenges (Regional Climate Information; Sea-level Rise and Regional Impacts; Cryosphere in a Changing Climate; Clouds, Circulation and Climate Sensitivity; Changes in Water Availability; Science Underpinning the Prediction and Attribution of Extreme Events). 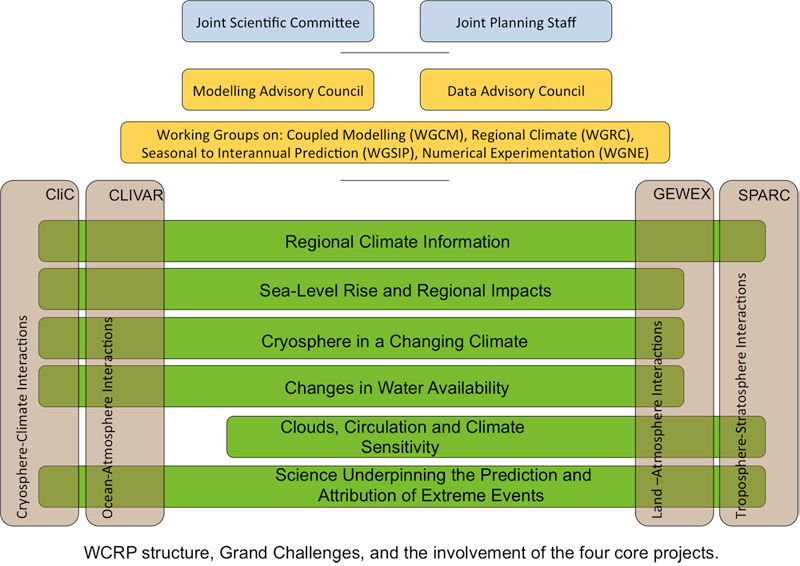 Representatives from the three other WCRP core projects provided updates on the status of their respective programmes. CLiC focused on future plans for the project, activities being undertaken in parallel with SPARC and GEWEX, and highlighted the opportunities for greater interaction with the CLIVAR community. GEWEX presented the recently published GEWEX science questions and the plans for the 2014 GEWEX science conference and pan-GEWEX meeting. SPARC highlighted their accomplishments in the last year and newly emerging activities. These WCRP presentations provided context for the discussions throughout the rest of the meeting.

Over the past year “tiger teams” had been formed to identify key uncertainties and problems within five focused scientific areas that had been identified at the previous SSG meeting. These tiger teams are now referred to as CLIVAR “Research Opportunities” (http://www.clivar.org/science/clivar-research-opportunities). Scientific leads from each of the tiger teams presented the key uncertainties and problems to be investigated in these areas and discussed how the CLIVAR Research Opportunities would contribute to the WCRP Grand Challenges.

The SSG concept was that the Research Opportunities (ResOps) would provide a mechanism for the project to be flexible and responsive to new ideas and challenges, and in particular those requiring cross-panel/project interactions. They would be complementary to the core CLIVAR research activities, which are facilitated via the existing panels and working groups. In this spirit, two new ResOps  (ENSO in a warmer world, and planetary heat balance and ocean heat storage) were also proposed to the meeting participants. The next step would be development of each of the ResOps into specific and tractably solvable problems over short (5 year) timescales.

The tiger teams were charged to engage with the wider community to further refine their proposals.  These would then be presented for input and discussion at various fora over the next 6-12 months, including Fall AGU, the annual meeting of the AMS and the Ocean Sciences Meeting in Hawaii in February 2014. 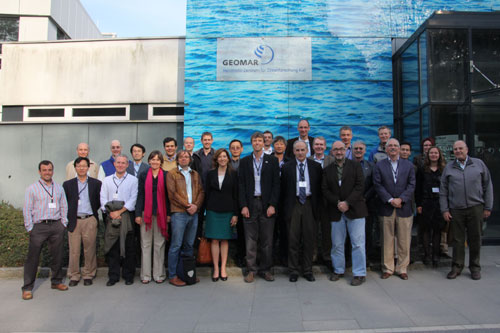 Participants of the CLIVAR SSG-20 meeting outside the GEOMAR building in Kiel.

Panels and working group representatives presented key accomplishments and how their activities contribute to the new WCRP and CLIVAR foci.  Discussions followed on how best to organize the project to allow both the continuation of the existing science and development of the new, short-term research opportunities.  Discussions were animated with contrasting opinions and perspectives voiced. This provided the input for the SSG to fully develop its new strategy, which will be presented to the JSC (Joint Scientific Committee) in late May 2013 for approval. Once approved the new CLIVAR strategy will be rolled out and presented to the wider scientific community over the next year.

Presentations on CLIVAR and WCRP communications, outreach, including the development of an Early Career Scientist (ECS) network, and capacity building were also made. Post presentation discussions were interactive and engaging, focusing on the future of the ECS network and use of social media to promote CLIVAR and WCRP science. The discussions provided the impetus for the SSG to propose a new CLIVAR working group focusing on scientific communications, knowledge exchange and outreach. 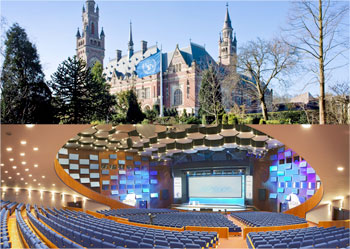 Overall the meeting was a success, bringing together a wide range of scientists from different academic disciplines to chart the future course for CLIVAR.  Looking to the future, it is likely that CLIVAR will hold a pan-CLIVAR meeting co-located with the pan-GEWEX meeting in July 2014 in The Hague. This will provide a unique opportunity for all CLIVAR panels and working groups to meet together under one roof for the first time and also promote further collaborative work between CLIVAR and GEWEX.

The Hague - location of the pan-GEWEX meeting

Whether the SSG meets again later in the year in addition to this venue is yet to be decided. Nevertheless, the future of CLIVAR and the science undertaken looks set to progress in new and exciting directions over the next few years.