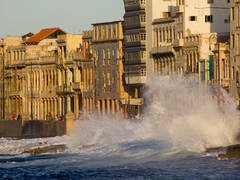 The Open Science Conference in New York from 10-14 July groups top scientists, city planners, coastal zone developers and managers and other stakeholders who will brainstorm on how to strengthen climate change adaptation and disaster resilience.

Many of the world’s biggest cities and economic hubs lie along coastlines and so are exposed to coastal flooding, storm surge and high tides, as are entire small island developing states. Causes of sea level change include thermal expansion of warming ocean water and the melting of glaciers and ice sheets, as well as geological factors.

The conference, Regional Sea Level Changes and Coastal Impacts, is organized by the World Climate Research Programme’s (WCRP) Core Project on Climate and Ocean (CLIVAR) and by the Intergovernmental Oceanographic Commission (IOC) of the United Nations Educational, Scientific and Cultural Organization (UNESCO). UN General Assembly President Peter Thompson, who co-chaired the recent UN summit on oceans, will address the opening ceremony, together with HRH Prince Albert II of Monaco.

“Since the mid-20th century, sea level has been rising as a consequence of global warming caused mainly by human emissions of heat-trapping greenhouse gases. The more we disrupt our climate, the more we risk severe, pervasive and irreversible impacts, in particular linked to heat waves, water availability, and sea level rise,” says Guy Brasseur, chair of WCRP’s joint scientific steering committee.

A major outcome of the conference will be an evaluation of the current state of sea level science, an outline of future research requirements for improving our understanding of sea level rise and variability and an assessment of the observational requirements, according to Robert Nicholls (University of Southampton, UK), Detlef Stammer (Universität Hamburg, Germany) and Roderik van de Wal (Universiteit Utrecht, Netherlands), co-chairs of the conference.

The objectives of the Sea Level 2017 Conference are to:

· Identify the key factors contributing to past, present and future regional sea level rise and its variability.

· Reduce the uncertainties of these factors.

· Define the requirements for new and augmented research, technical development and observations consistent with the above.

Specific scientific issues to be addressed will include the effects of a warming ocean and melting ice sheets on future regional sea level change, the respective contributions to coastal sea level rise, and its impact on the coastal environment and communities.

The conference aims to provide most advanced information on expected coastal sea level change required by coastal communities for adaptation and planning purposes.

There will be a panel on sea level rise adaptation in Greater New York: the response to Sandy and beyond. This will focus on lessons learned from the storm that caused widespread damage to houses and infrastructure and billions of dollars in economic costs, as well as human casualties, in October 2012.

In order to offer practical solutions to the problems posed by sea level change in a warming world, the scientific community needs to strengthen the dialogue with many stakeholders including the general public. This ensures that the scientists understand the practical impacts of sea level rise on coastal areas, and gives coastal communities an insight into options to minimize adverse effects of sea level rise.

There will therefore be a public event on 12 July to provide an opportunity for people from New York City and around the world to pose their questions and concerns about climate and sea level changes to scientists and stakeholders. This event will be organized by the Earth Institute, Columbia University.

A press conference will be held on Monday, July 10, 2017 at 13:00 at Lerner Hall, Colombia University. The conference is open to the media. Journalists are requested to pre-register by contacting msparrow@wmo.int