SWOT ‘Adopt-A-Crossover’ Consortium has been endorsed by CLIVAR 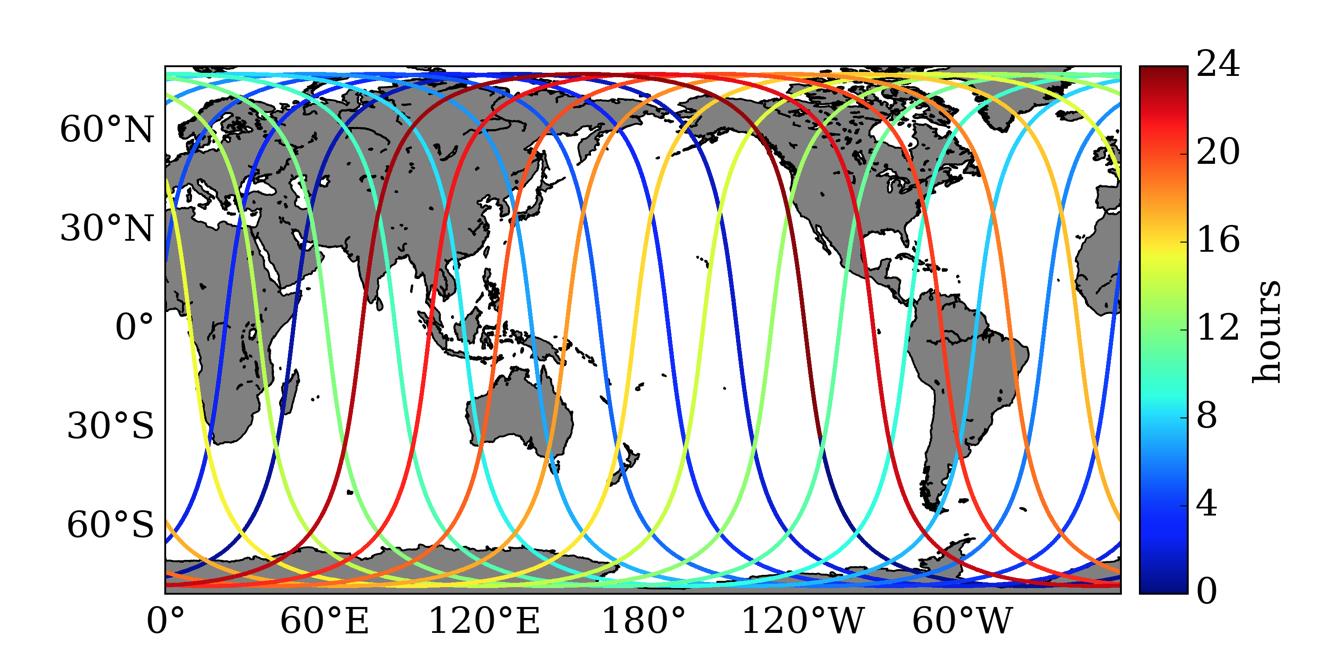 Figure 1: SWOT orbit during the fast-sampling phase (adapted from Wang et al., 2018a, © Copyright [2017] AMS). During the first months of the mission (expected for January-March 2022), the satellite will be on a special orbit which will overfly a smaller portion of the global ocean with a repeat cycle of 1 day (twice per day on crossovers). This so-called fast-sampling phase will resolve both the spatial and the temporal variability of the ocean fine-scale features along the ~120km wide swath. Successively, the nominal orbit of SWOT will cover the entire globe (between 78N and 78S) with a repeat cycle of 21 days.

‘Adopt-A-Crossover’ Consortium for a series of international in-situ campaigns (in-situ oceanographic deployments to accompany the future NASA/CNES SWOT SAR-interferometry altimetric mission), to coincide with the 1-day repeat, fast sampling phase of the future SWOT mission, scheduled for Jan-Feb 2022, has been endorsed by CLIVAR.

Conceived as a major new tool for climate studies, the Surface Water and Ocean Topography (SWOT) satellite mission will launch in late 2021. During the Calibration and validation (CalVal) phase (Dec. 2021 – early March 2022), the satellite will be in a 1-day-repeated fast sampling obit with enhanced temporal resolution , which is an ideal opportunity for coordinating the in-situ experiments during the same period under the satellite passes and crossing points (“crossovers”) for a focused study of the fine scale dynamics and their broader role in the Earth system.

The ‘Adopt-A-Crossover’ Consortium is aimed at covering the group of internationally-funded in-situ campaigns that will mainly take place under the one-day orbit of SWOT during the three-month period from December 2021 to early March 2022. The Consortium will facilitate regular meetings and discussion to share the in-situ strategies and sampling of the fine-scale upper ocean processes in the different regions, such as California Current, Western Pacific, Polar and Sub-polar regions and the Mediterranean. The Consortium exists separately from the SWOT Science Team, is expected to address a broader set of biological, chemical and physical phenomena than the more narrowly focused satellite mission.

The financial support for the coordination of the Consortium will be assured by the SWOT CalVal Team. A preliminary list of research groups that are willing to contribute to the objective of the Consortium, by providing either in-situ support (pending funding) or regional/conceptual experience, has been included in the attached proposal.

There is also an EOS article on the same subject, online since January 2019, and in print in EOS this month:
https://eos.org/project-updates/scientists-invited-to-collaborate-in-satellite-missions-debut