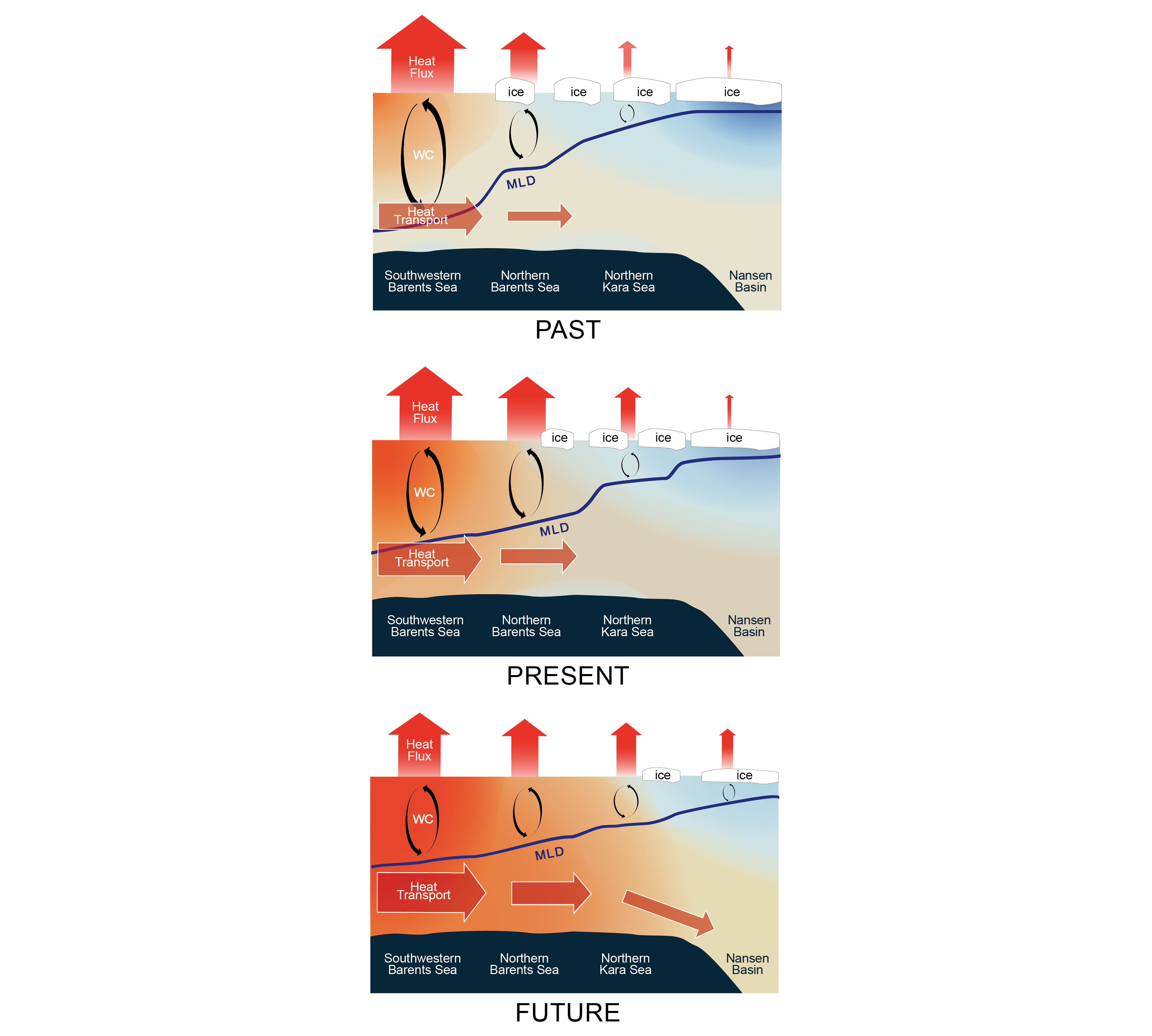 Conceptual schematic showing the related processes: ocean heat transport from the upstream increases because of the warming of the Atlantic Water inflow, but ocean surface heat release in the ice-free regions decreases due to more rapid atmosphere warming. Consequently, the mixed layer depth associated with winter convection decreases in the ice-free regions, and more heat is left in the ocean, leading to enhanced ocean warming in the downstream region. The latter induces stronger sea ice decline, more intensive ocean surface heat loss, and deeper mixed layer depth in winter in the downstream region. WC and MLD stand for winter convection and mixed layer depth, respectively.

A phenomenon called Arctic Atlantification was witnessed in the Eurasian sector of the Arctic Ocean recently. It is characterized by significant ocean warming and weakening in upper ocean stratification along with winter sea ice decline. While the change in atmosphere–ocean–sea ice interaction during the Arctic Atlantification is still an open question, a most recently paper published in Nature Communication gives a possible answer. The paper was highlighted by the editor as the "featured article" in the "Climate change impacts" field.

As a cooling machine of the Arctic Ocean, the Barents Sea releases most of the incoming ocean heat originating from the North Atlantic. The related air-sea heat exchange plays a crucial role in both regulating the climate and determining the deep circulation in the Arctic Ocean and beyond. It was reported that the efficiency of this cooling machine has decreased significantly. In this study, the authors find that the overall cooling efficiency did not really drop: When the cooling efficiency decreased in the southern Barents Sea, it increased in the northern Barents and Kara Seas, indicating that the cooling machine has expanded poleward.

According to CMIP6 climate model projections, it is very likely that the cooling machine will continue to expand to the Kara Sea and then to the Arctic Basin in a warming climate. As a result, the Arctic Atlantification will be enhanced and pushed poleward in the future.

This work is co-contributed by scientists from the CLIVAR/CliC Northern Ocean Region Panel (NORP) and the Ocean Model Development Panel (OMDP).