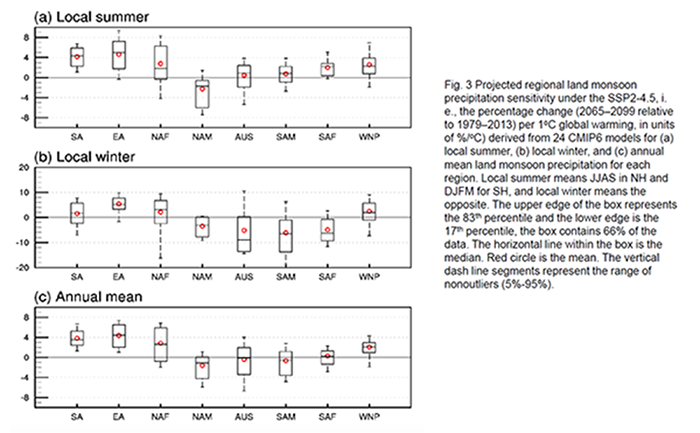 A new article was published in the Bulletin of the American Meteorological Society that reviews the current knowledge on detection, attribution and projection of global and regional monsoons (South Asian, East Asian, Australian, South American, North American, and African) under climate change.

Monsoon rainfall has profound economic and societal impacts for more than two-thirds of the global population. The authors provide a review on past monsoon changes and their primary drivers, the projected future changes and key physical processes, and discuss challenges of the present and future modeling and outlooks. Continued global warming and urbanization over the past century has already caused a significant rise in the intensity and frequency of extreme rainfall events in all monsoon regions (high confidence). Observed changes in the mean monsoon rainfall vary by region with significant decadal variations. NH land monsoon rainfall as a whole declined from 1950 to 1980 and rebounded after the 1980s, due to the competing influences of internal climate variability and radiative forcing from GHGs and aerosol forcing (high confidence); however, it remains a challenge to quantify their relative contributions.

The CMIP6 models simulate better global monsoon intensity and precipitation over CMIP5 models, but common biases and large intermodal spreads persist. Nevertheless, there is high confidence that the frequency and intensity of monsoon extreme rainfall events will increase, alongside an increasing risk of drought over some regions. Also, land monsoon rainfall will increase in South Asia and East Asia (high confidence) and northern Africa (medium confidence) and decrease in North America and unchanged in Southern Hemisphere. Over Asian-Australian monsoon region the rainfall variability is projected to increase on daily to decadal scales. The rainy season will likely be lengthened in the Northern Hemisphere due to late retreat (especially over East Asia), but shortened in the Southern Hemisphere due to delayed onset. 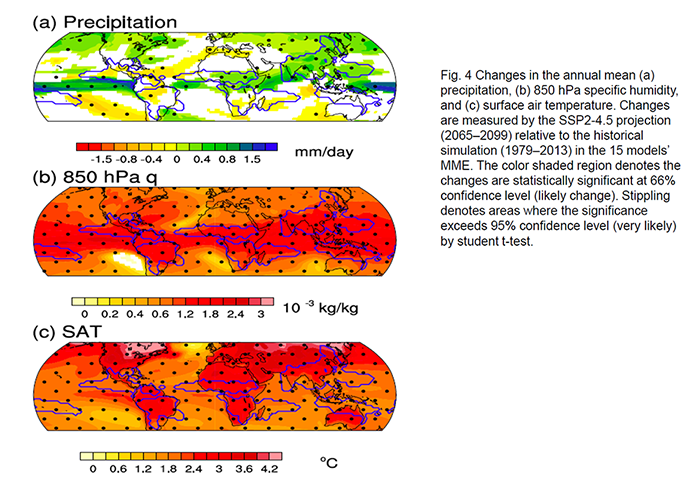