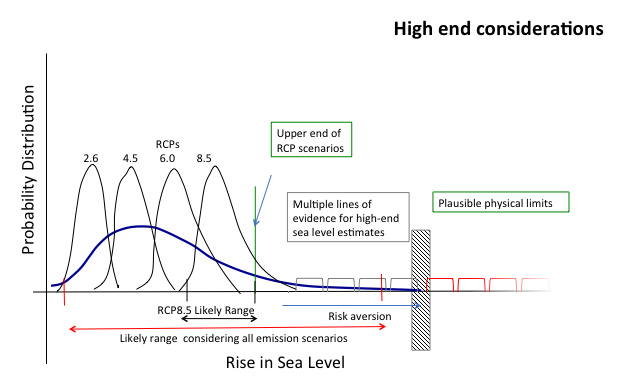 Figure 2: Multiple concepts of high-end sea-level. The x-axis is the amount of sea-level rise for a given time-interval. In the vertical the figure displays the probability density. The blue curve represents a combined pdf for all possible emission scenarios. The grey and red building blocks have to be added to the RCP curves depending on the risk aversion of the users. The hatched vertical bar represents the range in which the high-end is being expected to reside for a particular stakeholder. The distinction between gray and red building blocks is lines of evidence vs physical implausibility (D. Stammer et al., 2019).

Because of the existing confusion about multiple perspectives on high-end scenarios, there needs to be a reconciliation of those perspectives by integrating the best scientific information and guidance to provide consensus on actionable science that can be used by governments and coastal decision-makers depending on their needs. On the other hand, users with different levels of risk aversion may choose different upper bounds depending on their particular application, which is typically influenced by national standards and national regulators. For instance, the upper bound of sea-level rise considered for a user planning the development of a nuclear power station and a user proposing a farming development near the coast is almost certain to be quite different. Therefore, the high-end sea level rise prediction cannot be based simply on expert elicitation or on the latest studies. Instead, it needs to be timeframe-, and emission-scenario- specific, and it also needs to go beyond the IPCC considerations on the likely range for sea-level rise projection and consider all relevant physical mechanisms including natural climate variability, and all emission scenarios, that may alter the upper tail of underlying sea-level rise function, as well as the risk aversion of stakeholders.

In order to link the robust sea-level science with stakeholder needs, a conceptual framework for high-end sea-level rise as a function of time scale has recently been developed, as a contribution to the WCRP Grand Challenge on Regional Sea Level Change and Coastal Impacts (also a CLIVAR Research Foci). In the absence of the information representing the upper tail of a single joint sea-level frequency distribution, that considers all plausible yet unknown emission scenarios as well as involved physical mechanisms and natural variability of sea-level, which is not possible, the proposed framework infers the required information from explicit conditional statements (lines of evidence) in combination with upper (plausible) physical bounds. This approach acknowledges the growing uncertainty in respective estimates with increasing time scale. It also allows consideration of the various levels of risk aversion of the diverse stakeholders who make coastal policy and adaptation decisions, whilst maintaining scientific rigor.