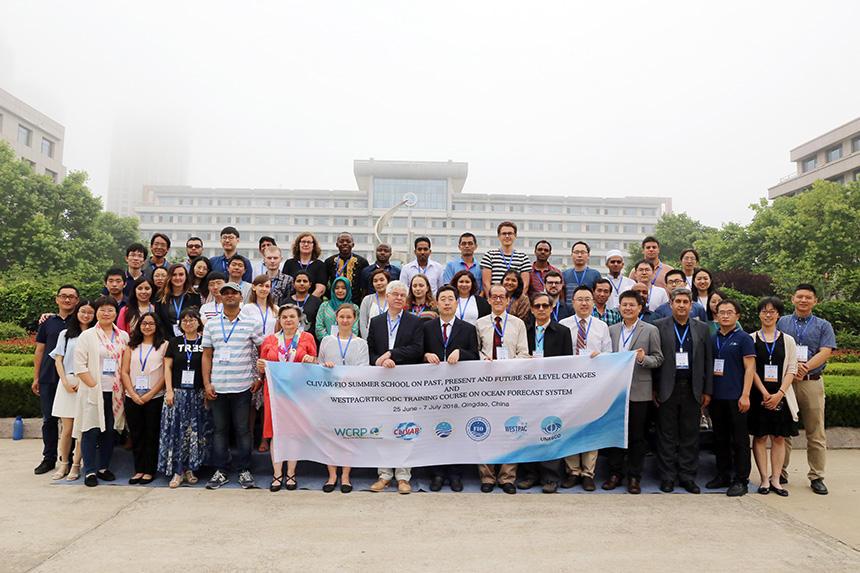 The First CLIVAR- FIO summer school on “Past, Present and Future Sea Level Changes” was held at Qingdao, China from June 25 to June 30, 2018. 38 trainees from 25 countries attended the course, among which are 15 females and 23 males. During the summer course, 17 lectures have been provided by 8 experienced lecturers on sea level science from Germany, UK, France, Australia and China, well capture the observation and modeling of sea level changes, contribution from vertical land movement, glacier and ice sheet, the sea level projection in 2100 and beyond as well as the coastal impacts of sea level rise and hazard management in coastal areas.

Positive feedback received from both trainees and lecturers regarding the organisation of the summer course. During the trainee report sessions, each of the trainee presented their own researches to their classmates and teachers, which has provided a good opportunity for everyone in the classroom to know each other. It also enabled the lecturers to know better about their audience, and make necessary adjustment about their lectures to be more easily digested by the trainees. Also, good interaction between lecturers and trainees were observed both in the class and during the breaks. According to the feedback from trainees, the content, quality and arrangement of the lectures are well designed and delivered. There are interrelations among lectures, and the key concepts and messages on sea level changes have been reviewed and re-emphasized by several lecturers during their talks. However, more practice would be expected for the training courses in the future. By the end of the training course, new ideas for future cooperation emerged from some of the groups, which are strongly encouraged by CLIVAR.

The CLIVAR-FIO summer school was organised back-to-back with the WESTPAC/RTRC-ODC Training Course on Ocean Forecast System, which took place from July 2 to 7, 2018