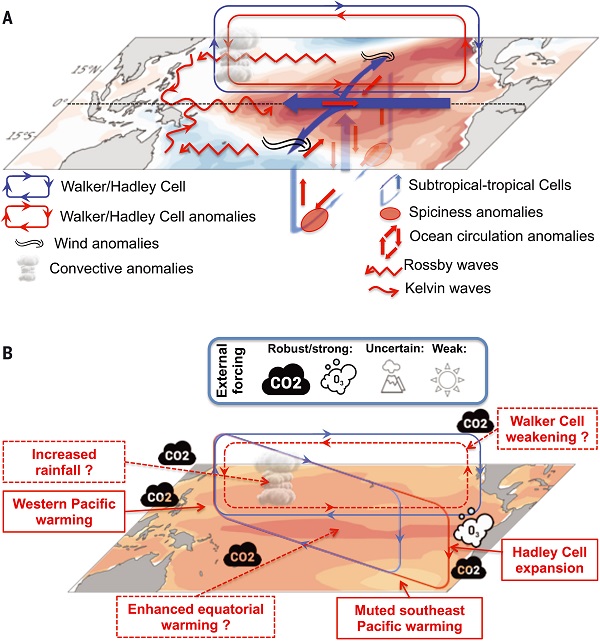 Fig Mechanisms of Internal and external TPDV. (A) Internal. (B) External.

Tropical Pacific decadal climate variability and change (TPDV), which is evident in instrumental records, paleoclimate records over past millennia, and climate models, affects the global climate system, extreme weather events, agricultural production, streamflow, marine and terrestrial ecosystems, and biodiversity. Although major international efforts are underway to provide decadal climate predictions, there is still a great deal of uncertainty about the characteristics and causes of TPDV and the accuracy to which it can be simulated and predicted. A recent synthesis published in Science (Power et al., 2021, https://doi.org/10.1126/science.aay9165), reviews the current understanding of TPDV, its spatial and temporal characteristics, its many proposed mechanisms—both natural and anthropogenic and the interactions between them—and the current ability of state-of-the-art modeling and prediction systems to simulate and predict TPDV.  The review was coordinated and largely contributed by the CLIVAR Pacific Region Panel, as an outcome of two workshops on this topic held in Ecuador (2018) and in France (2019), respectively.

According to the review, TPDV can occur spontaneously as “internal” variability, or in response to “external” forcing. Although internal TPDV may arise to some degree as a residual of independent El Niño–Southern Oscillation (ENSO) events, it can also result from oceanic processes occurring at decadal time scales which involve the upper-ocean overturning circulation known as subtropical-tropical cells (STCs). STCs’ variability may be forced by wind anomalies associated with internal atmospheric variability in the extra-tropical Pacific or induced by influences from other ocean basins. It may also result from wind anomalies that arise as a response to the equatorial SST anomalies themselves, but the nature of the most influential drivers is still unclear. Whatever the mechanism, internal TPDV appears to affect the rate of increase of globally averaged surface air temperatures. Externally forced TPDV, in the form of mean-state changes that unfold on decadal and longer time scales, can be driven by anthropogenic [e.g., greenhouse gas (GHG) increases, sulfate aerosols changes] and natural processes (e.g., volcanic eruptions). External forcing can also affect the behavior and characteristics of internal TPDV.

The relative contribution of TPDV is considerably larger in the western Pacific, where the low-frequency SST signal is dominated by a long-term warming trend similar to the global anthropogenic warming signal. Meanwhile, internal TPDV dominates in the central Pacific and in off-equatorial bands in the eastern part of the basin, especially in the Northern Hemisphere. In the western tropical Pacific, GHG-forced warming has reached levels that are unprecedented in the historical record. Increases in equatorial precipitation and precipitation variability in parts of the tropical Pacific, and a southward expansion of the Southern Hemisphere Hadley cell, are projected by climate models with some confidence. Yet projected changes in eastern equatorial Pacific surface temperature, and changes in the strength of the Walker circulation and trade winds, remain very uncertain.

Although several mechanisms have been proposed to explain TPDV, their relative importance as sources of decadal prediction remains unclear. Issues in need of greater understanding include the role played by the upper ocean overturning circulation in controlling tropical Pacific sea surface temperatures at decadal time scales, the impact of external forcing on the Walker circulation and characteristics of internally generated TPDV, and the extent to which sea surface temperature variability in other basins drives TPDV. A better understanding of the origin and spatial pattern of current predictive skill is also needed. Improving predictions and projections requires improvements in the quality, quantity, and length of instrumental and paleoclimate records and in the performance of climate models and data assimilation methods used to make predictions.