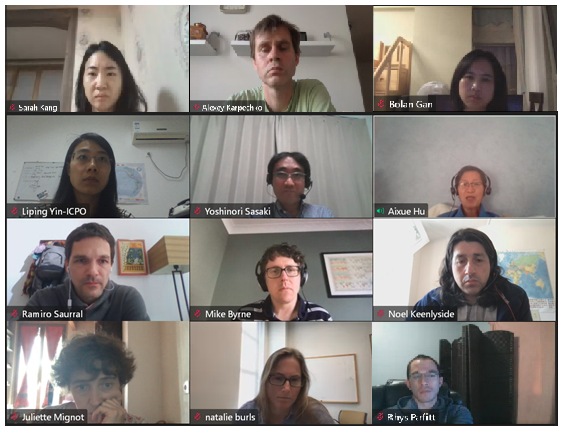 The 5th Session of the CLIVAR Climate Dynamics Panel (CDP-5) was organized virtually, spanning from late May to late June.

Under the background that the World Climate Research Programme (WCRP) encourages people to reduce carbon footprint, and with the impact of the COVID-19, the CDP co-chairs decided to organize this panel meeting online. The meeting was composed of a scientific session (31st May, 2nd June, and 4th June) and a business and whole discussion one (29th June).

The scientific session was divided into three parts based on the themes of presentations, which were put forward during the CDP-4: i) the organisation of storms, blocks and jet streams on seasonal and longer time scales, ii) ocean basin to ocean basin and tropical-extratropical teleconnections, and iii) the development of predictive theories of climate dynamics. Before the meeting, all the members had recorded the presentations on potential emerging topics that the panel could focus on to brainstorm in order to identify panel activities for the next 12-18 months.

The CDP co-chair, Noel Keenlyside, made a quick open mark, introducing the current activities of CDP, as well as the new direction of WCRP implementation strategy and Lighthouse Activities. After that, all the members freely discussed each presentation shared before the meeting.

The panel basically concluded on having one main workshop per year as a panel activity, with the panel coming up with a common relevant theme. CDP has initially planned to run a workshop next summer on extra-tropical climate variability. This would include air-sea interaction, teleconnections (tropics-extratropics, inter-basin, atmosphere/ocean), external/internal factors, cross-timescale interactions (weather-climate), and include paleo component. This doesn’t preclude other panel activities, but it would be good to have a regular one. A small telecom will be arranged to discuss the planned activities.

The online panel meeting was proved to be a good way for members to come together for the scientific discussion efficiently. The meeting report will be uploaded to the CLIVAR webpage later.