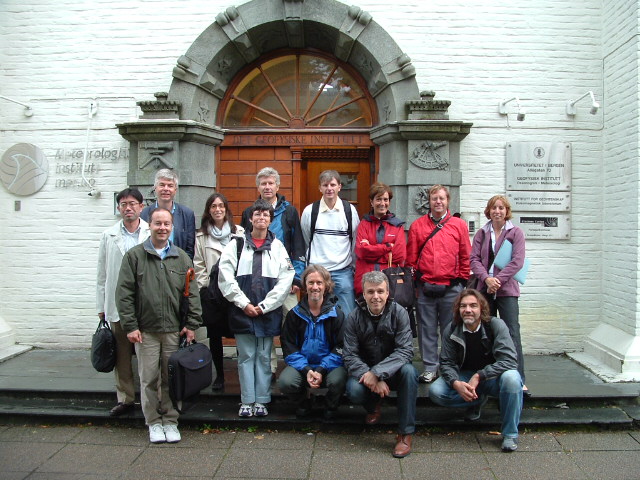 WGOMD members and guests outside the Geophysical Institute, University of Bergen, 26 August 2007

Report of the 7th Session of WGOMD

Presentations from the meeting are available here:

An Introduction to WGOMD
S. Griffies

Ocean Modelling Activities in Japan (some activities in China and Korea are included)
H. Tsujino

--Introduction to the Panel Meeting (Griffies)

--Discussion on assimilation of data from IPY projects into models (Schodlok)

During this meeting we will try to limit the time devoted to presentations on existing programs/workshops/etc.. and allow more time to discussion on the major issues that the panel needs to make progress on, namely the CORE experiments and ocean model evaluation metrics. To achieve this, we request a written report (doc or pdf) on the smaller issues to distribute before the meeting and to refer to it during the discussions at the meeting.The report should be concise, no longer than a couple of pages. Please send the report by email to Anna Pirani by 15th August 2007. The reporter, during the meeting, is expected to give an overview of the document with additional visual material (max 3 slides per subject), assuming the rest of the panel has already read the report.

Here are a few topics to consider:

Stephen will present the latest on the CORE manuscript (plans are to be fully submitted manuscript no later than August 2007), with a discussion of possible follow up work. In particular, we may wish to consider focusing more on the interannually varying CORE forcing. At the Hobart meeting, only Marika and Claus had any experience. Does anyone else have experience? There is presently no clear protocol for these simulations. A protocol would need to be agreed upon to facilitate comparison studies.

We need to discuss something to complement the fixed atmosphere-forced CORE simulations due to the limitations of this approach for ocean-ice modelling. One area that WGOMD may wish to investigate is an idealized atmosphere (energy balance, simple GCM, other?) in support for comparing ocean-ice simulations with this simple atmosphere. There are plenty available, and many WGOMD members may have experience. Is there one that we can sanction right now, or do we need to do some of our own investigation/development? Can we develop an anomalous EBM where the anomalies are based on the CORE data? In general, if WGOMD could come to some agreement over the next years on a strategy for running these sorts of models, the community would be quite supportive.

In general, WGOMD has a responsibility to respond to the modelling needs of the basin panels. As in the past, the panels continue to ask WGOMD "what do modellers wish to have measured in order to evaluate simulation integrity?" We never really addressed this question. Instead, we spent our energy just getting the CORE simulations running. Do we wish to reconsider this issue now that CORE-I is more well developed? One idea, which would require lots of work, is to write a WGOMD document that surveys all the metrics used by global modellers to evaluate their simulations, and meshes those metrics with available datasets. I am unsure how this document would look in practice, but it could, in principle, be valuable to the community.

4. More on specifics of the recent Basin Panel meetings

Pacific: Steve attended the Pacific Basin Panel meeting in Honolulu in Feb 2006. They may meet again before our August meeting...I am unsure. I will report to WGOMD on the Honolulu meeting.

Atlantic: Can we get a summary on the Kiel meeting in March? Anyone attending the Atlantic panel to summarize their work?

Indian Ocean: Who has input on this panel?

Southern Ocean: we should have plenty of input from the SOPHOCLES folks