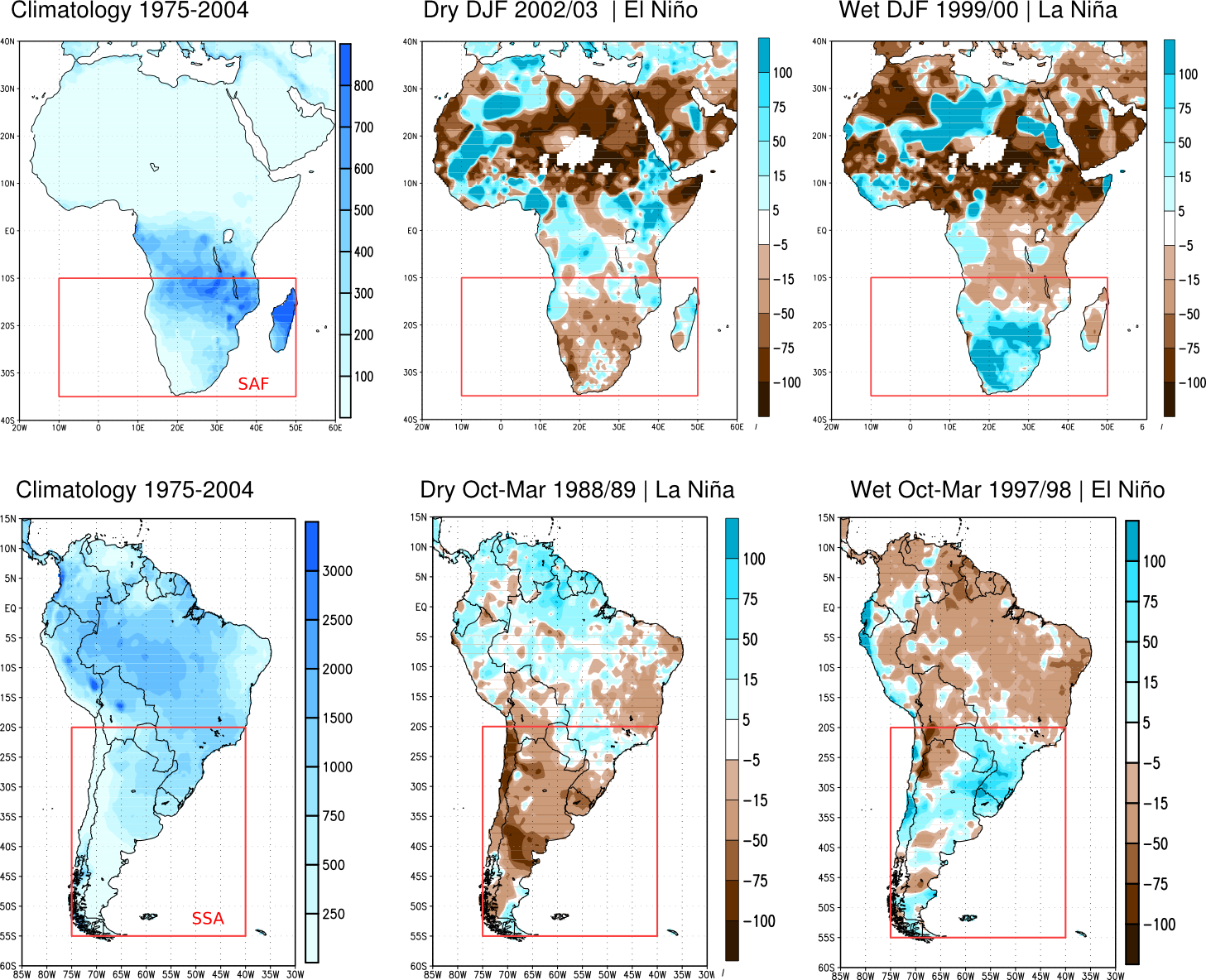 This study shows how climate change due to humans has affected the probability that extreme events in South America and Southern Africa evolved in the way that they did.

Southern South America and Southern Africa have experienced prolonged wet and dry periods in the recent past that have caused large socio-economic damages (e.g. Southern African drought and resulting famine in 2002/03). Prolonged dry or wet rainy seasons are part of the natural variability of weather in these regions, which is predominantly driven by the El Niño Southern Oscillation (ENSO) (see Figure depicting extreme dry and wet season in the two study regions).

This analysis reveals that dry rainy seasons over Southern Africa as occurred in 2002/03 have become more likely as a consequence of human-induced climate change. It also finds tentative evidence that extreme rainfall, such as observed in 1999/2000, has become more frequent. The exact increase of frequency is uncertain, but our study shows that these extremes are about 50% more likely than in pre-industrial times.

Average rainfall during the rainy season in Southern South America has been observed to increase over the last century. This effect is only weak in the climate simulations. Consequently, it was not possible to robustly determine if human activity contributed to the wet and dry events that occurred during the Southern Hemisphere summers of 1997/98 and 1988/89, respectively.

The study sheds light on regions which have received little attention so far in a growing effort of event attribution studies of extreme events. Demonstrating that climate change affects today’s society across the globe raises awareness that climate change is already affecting our environment and provides a powerful tool in communicating its implications.

This article is one of a series published in a Special Issue of Weather and Climate Extemes, Volume 9, Pages 1-78 (September 2015) on The World Climate Research Program Grand Challenge on Extremes – WCRP-ICTP Summer School on Attribution and Prediction of Extreme Events.

Figure: Climatological monthly precipitation over Southern South America (SSA) and Southern Africa (SAF) for the period 1975–2004 and selected anomalous seasons illustrating a dry and wet season over SSA and a dry and wet season over SAF. The selected seasons occurred during El Niño and La Niña years and had significant impacts on socio-economic sectors in the respective regions.