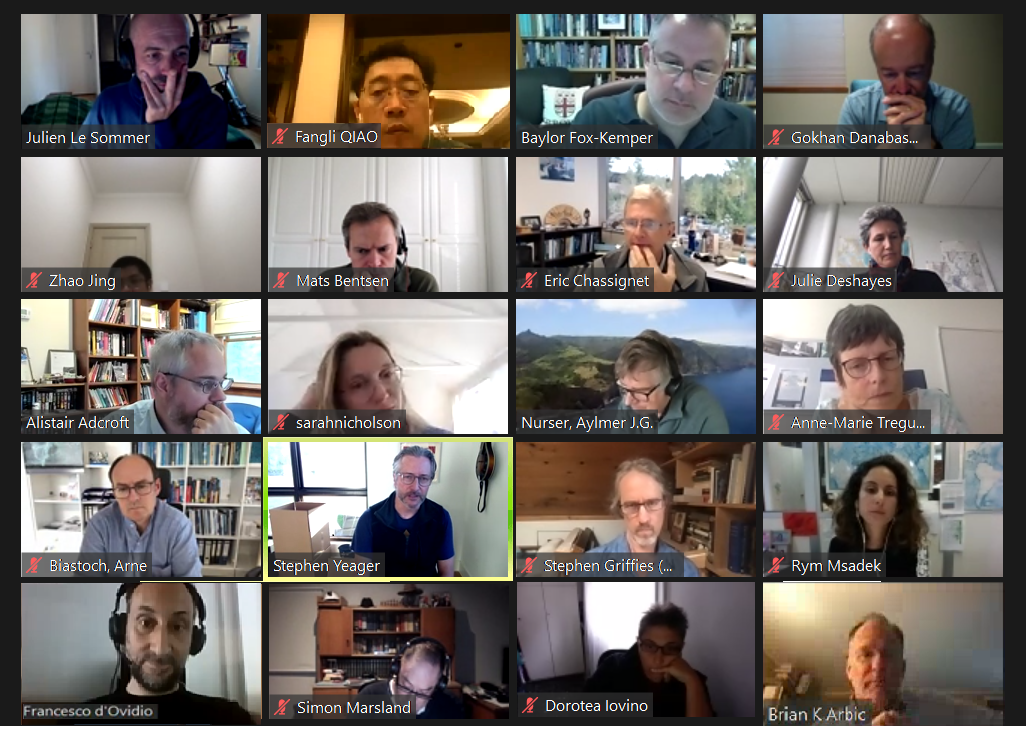 The sixth session of Ocean Model Development Panel (OMDP-6), as a side meeting of the Future Directions in Basin and Global High-resolution Ocean Modelling workshop, took place on 4th October.

After four days of gathering at the workshop discussing the future directions of the high resolution modeling, the OMDP panel orginised its sixth session. More than twenty panel members/emeritus/emerita, as well as leadership from the SWOT, participated in this virtual panel meeting.

The main topics of OMDP-6 were to discuss the outcome of the workshop on “Future directions in High-Resolution Ocean Modelling”, and to discuss the articulation with SWOT Adopt-A-Crossover initiative. Panel business was thoroughly discussed after the scientific session.

Many scientific topics raised in the workshop were reviewed, aiming to identify the gaps and form new panel projects. For example, the atmospheric boundary layer approach to estimate some coupled atmosphere-ocean effects, the partial coupling approach for atmosphere-ocean coupling, the role of deep water formation in polar oceans and diagnostic tools for the AMOC were scientific topics from the meeting that related to ongoing panel projects.

Francesco d’Ovidio, the co-chair of the SWOT Adopt-A-Crossover consortium, gave the presentation on the SWOT Adopt-a-crossover Consortium which is a CLIVAR endorsed activity, and Brian Arbic, co-chair of SWOT Science Team High Resolution Modelling Working Group, joined the discussion. As the outcome, an action team will form and provide feedback to the SWOT team within the next month.

During the panel business part, the panel communication tools, OMDP Google Scholar page, membership, contributing to Lighthouse Activities, and future virtual meetings (possibly as early as January of next year), as well as potential in-person meetings were discussed. Some aspects of membership issues in the coming two years were noted for research into panelists’ history with the panel. The panel noted that discussion has been limited in the virtual format of recent meetings due to timezone differences.

The panel meeting ended with an open discussion among the panel members. Everyone introduced their current work and future plans that were relevant to OMDP.