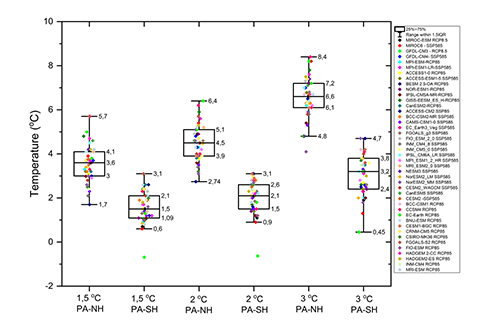 Figure: Polar Amplification simulated by CMIP5 and CMIP6 climate models for the temperature thresholds of +1.5°C, 2.0°C and 3.0°C global mean warming under RCP8.5 and SSP585 scenarios of northern and southern hemispheres high latitudes. The boxplots indicate the central 50% intermodal range (25% - 75%), the median and upper and lower boundaries in the CMIP models.

One of the most visible signs of global warming is the fast change in the polar regions. The increase in Arctic temperatures, for instance, is almost twice as large as the global average in recent decades.  An equivalent albeit less studied phenomenon occurs in Antarctica. This phenomenon is known as the Polar Amplification and is related to many nonlinear, complex coupled ocean-atmosphere processes with effects beyond high latitudes. Aiming to account for the Polar Amplification, this study used global climate simulations from CMIP5 and CMIP6 to investigate the effects of three different global warming thresholds (1.5 °C, 2 °C and 3 °C) and the projected ice free occurrence of both poles. Our results shown high climate sensitivity in the Arctic and Antarctica as a response to the increase in atmospheric CO2 concentration. The warming signal is not symmetric in the two poles: the Arctic warms faster than Antarctica in all thresholds. The year in which the average air temperatures brought from CMIP5 and CMIP6 models rises by 1.5 °C is 2024. An average rise of 2 °C (3 °C) global warming occurs in 2042 (2063). Results seen in Figure show that for the +1.5 °C (+2 °C) Paris Agreement thresholds, the simulated median warming at northern hemisphere high latitudes was 3.6 °C (4.5 °C). Considering the +3 °C global warming threshold, the simulated median warming was close to 6.6 °C. The equivalent warming for all targets (+1.5 °C, 2 °C and 3 °C) are similar, presenting values more than twice as larger as the global average (2.4, 2.3 and 2.2 times, respectively). For the southern hemisphere high latitudes, the median warming simulated for the +1.5°C (+2 °C) Paris Agreement target was 1.5 °C (2.1 °C).   Most CMIP models show an accelerating decline in the summer minimum sea ice extension and ice-free conditions are found in all warming thresholds for both the Arctic and Antarctica, especially from the year 2030 onwards.