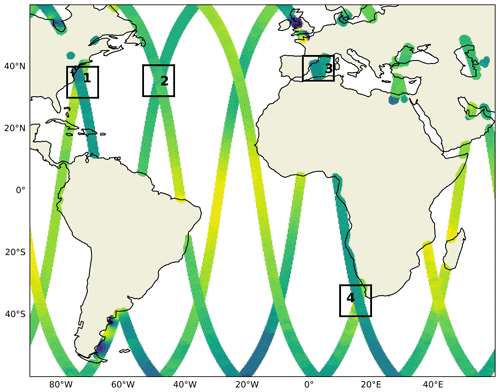 Fig. 1 SWOT tracks during its calibration phase and strategic Xover regions in the Atlantic sector. The regions cover the Gulf Stream separation and its extension (Regions 1 and 2), the western Mediterranean Sea (Region 3), and the Agulhas Rings (Region 4).

With the increase in computational power, ocean models with kilometer-scale resolution have emerged over the last decade. These models have been used for quantifying the energetic exchanges between spatial scales, informing the design of eddy parametrizations, and preparing observing networks. The explosion of model outputs makes it difficult to transfer and analyze the data, which are on the order of terabytes. Recently, the CLIVAR Ocean Model Development Panel, collaborated with community colleagues, used a cloud-based analysis framework proposed by the Pangeo project, to systematically assess the realism of the kilometer-scale resolution models, aiming to tackle the existed distribution and analysis challenges of the model output.