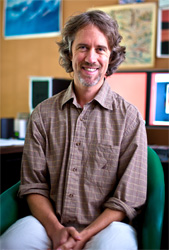 We are very proud and happy to announce that Stephen Griffies (NOAA/GFDL), SSG member and former long term WGOMD member and Chair, has been awarded the 2014 EGU Fridtjof Nansen Medal for his outstanding contribution and leadership in ocean general circulation model development and critical insights in the physical nature and parameterisation of ocean processes.

Stephen Griffies is one of the world’s foremost ocean circulation model developers, the lead developer of the Modular Ocean Model (MOM), one of the most advanced ocean circulation modelling systems in the world. Griffies developed the model with freely available (open source) code that is used at numerous meteorological and oceanographic institutions worldwide for studies of global and regional ocean systems.

Griffies has critically contributed to all major pillars of ocean model development including numerical algorithms, physical parameterisations and computational techniques. Numerical ocean models developed by Griffies constitute oceanic components for many coupled climate models that are central to current projections of climate change and climate predictions on seasonal, decadal and centennial time scales. Griffies’ 2004 monograph, Fundamentals of Ocean Climate Models, has become the standard reference for numerical methods and physical parameterisations used by ocean climate models, exemplifying his talent as a writer and a teacher.

Griffies is a recognised leader of the world-wide ocean modelling community. For many years he has led the Coordinated Ocean Reference Experiments (COREs), one of the most successful inter-comparison projects in oceanography. Many of the papers by the CORE community, both led by, initiated and supported by Griffies, have been highly cited and form the basis for present-day validation of ocean models. For ten years Griffies has chaired the CLIVAR Working Group on Ocean Model Development, performing a tremendous job to advance ocean modelling in the international scientific community. Through these activities Griffies has developed an international platform for discussing and validating the results of the ocean modelling community, in which his leadership is unequivocal.