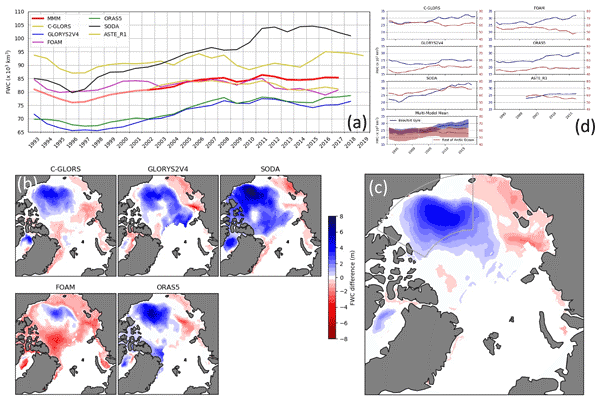 Figure: (a) Time series of annual freshwater content integrated from 70–90o N and down to the 34 isohaline for the 1993–2019 period from six ORAs (in 103 km3). Multi-model mean shown in red; darker red indicates all six ORAs are included. (b) Difference (in m) between 2010–2017 and 2000–2010 means in five ORAs (not including ASTE_R1). (c) Multi-model mean of differences (in m) shown in (b). (d) Annual freshwater content separated into contributions from the Beaufort Gyre (blue) and the rest of the Arctic Ocean (red). The lower right figure shows the multi-model mean with ± 1 standard deviation shown with shading. The Beaufort Gyre is defined as 70–80oN, 120–180oW to be consistent with satellite estimates included in the study.

The Arctic climate system is rapidly transitioning into a new regime with a reduction in the extent of sea ice, enhanced mixing in the ocean and atmosphere, and thus enhanced coupling within the ocean–ice–atmosphere system; these physical changes are leading to ecosystem changes in the Arctic Ocean. In a recently published review paper “Freshwater in the Arctic Ocean 2010–2019” written by the CLIVAR/CliC NORP panel, the authors assess one of the critically important aspects of this new regime, the variability of Arctic freshwater. Freshwater plays a fundamental role in the Arctic climate system by impacting ocean stratification and sea ice formation or melt. This study uses ocean reanalyses, in situ and satellite measurements to assess how freshwater budgets have changed relative to the 2000–2010 period, including discussions of processes such as poleward atmospheric moisture transport, runoff from the Greenland Ice Sheet and Arctic glaciers, the role of snow on sea ice, and vertical redistribution.

This study finds that sea ice cover has become more seasonal and mobile; the mass loss of the Greenland Ice Sheet increased in the 2010s (particularly in the western, northern, and southern regions), and imported warm, salty Atlantic waters shoaled. During 2000–2010, the Arctic Oscillation and moisture transport into the Arctic were in-phase and had a positive trend. This cyclonic atmospheric circulation pattern forces reduced freshwater content on the Atlantic–Eurasian side of the Arctic Ocean and freshwater gains in the Beaufort Gyre. Most notably, the trend in Arctic freshwater content in the 2010s stabilized relative to the 2000s, potentially due to an increased compensation between a freshening of the Beaufort Gyre and a reduction in freshwater in the rest of the Arctic Ocean. However, large inter-model spread across the ocean reanalyses and uncertainty in the observations used in this study prevent a definitive conclusion about the degree of this compensation.