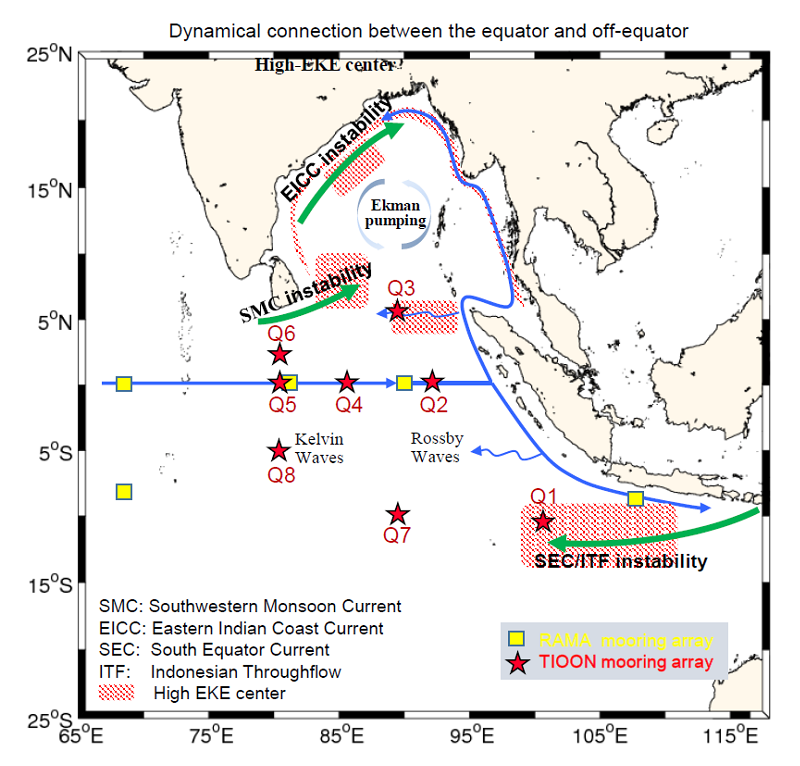 As an important part of the Indo-Pacific warm poll, the Indian Ocean has great significance for research on the Asian Monsoon system and global climate change. In particular, since the twentieth century, the tropical eastern Indian Ocean has exhibited strong warming trend and may have a key role in the stalled global warming rate (the ‘hiatus’).  From 1960s onwards, several international (e.g. TOGA, WOCE and Argo etc.) and regional programmes (e.g. IndOOS, IIOE, RAMA, INDEX and MONEX etc.) as well as some short-term and regional studies have led to important new insights into Indian Ocean. However, the Indian Ocean still lacks in situ observations, with far fewer observations than other basins. A recent study in Bulletin of American Meteorological Society (BAMS) led by CLIVAR IORP member - Dr. Dongxiao Wang’s team (Zeng et al., 2021, https://doi.org/10.1175/BAMS-D-19-0234.1) briefly overviews the decadal progress of the eastern Tropical Indian Ocean Observing Network (TIOON), a persistent observation effort implemented by China.

Established in 2010, the TIOON consists of two parts: large-scope observations performed by the eastern Tropical Indian Ocean Comprehensive Experiment Cruise (TIO-CEC) missions and moored measurements provided by TIOON mooring array and the hydrological meteorological buoys. The yearly TIO-CEC mission, usually operated in the period of March to May (the pre-onset stage of the summer monsoon), is jointly sponsored by the National Natural Science Foundation of China (NSFC), the Strategic Priority Research Programme of the Chinese Academy of Sciences (CAS) and the Major State Research Development Programme of China, with the main route confined to the region of 10°S~10°N, 80°~150°E, and equipped with shipboard acoustic Doppler current profiler (ADCP), underwater conductivity and temperature sensor (CT), automatic weather station (AWS), heat flux sensor, conductivity-temperature-depth (CTD), expendable bathythermograph (XBT), the expendable CTD and GPS radiosonade. Meanwhile, to supplement the RAMA buoy array, the enhanced TIOON mooring array consisting of eight sub-thermocline ADCP moorings was established since 2013. The TIOON mooring equipped with both upward-looking and downward-looking WHLS75K ADCP, provide valuable current monitoring information to depth of 1000m in the Indian Ocean. In addition, two real-time hydrological meteorological buoys were deployed in 2019 and 2020 in the equatorial Indian Ocean to improve the monitoring of air-sea interaction.

The oceanic and meteorological data collected from TIOON can be used to investigate the important dynamic processes in the eastern Tropical Indian Ocean, particularly on the features and physical processes controlling multi-variabilities of the Equatorial Undercurrent and Equatorial Intermediate Current along the equator; and the data also reveal strong intraseasonal variability in the surface meridional current and semiannual variability in the mid-depth zonal currents off the equator.

The data from the TIOON has contributed to the Indian Ocean Observing System (IndOOS), which was initiated and supported by the CLIVAR/IOC-GOOS Indian Ocean Region Panel (IORP) along with the other partners in the Indian Ocean. Joint research carried out among Indian Ocean rim countries using the TIOON data was also stimulated. The TIOON data will have a 5-year priority period to be used by the participating institutes and universities, and researchers can apply the data access under the supervision of NSFC after the priority period.

The TIOON is supported by the NSFC Open Research Cruise Program and the Strategic Priority Research Program of Chinese Academy of Sciences (XDA11010502, XDA20060500), Second Tibetan Plateau Scientific Expedition and Research (STEP) program (Grant 2019QZKK0102), China–Sri Lanka Joint Centre for Education and Research (CSL-CER), CAS and many other programs. In the future, with the sustainable support from China, the TIOON, together with other aspiring field investigation programs will continuously contribute to the long-term observation in the Indian Ocean and may expand to the western tropical Indian Ocean, in order to further explore the different characteristics and dynamics of the current between eastern and western Indian Ocean and their interactions.